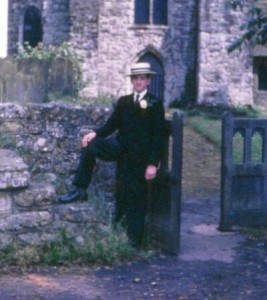 Some complete twat said that school days are the best days of your life. This is totally untrue, at least in my case. After a dubious start at a prep school in Northwood, where I was boarding from age eight onwards (how could my parents survive without me? Me and my whoosh of white curly hair, savagely teased into a voluminous lump?) And how could they set me free to wander amongst footballers with runny noses, teachers who couldn’t wait to beat me for no apparent reason, and older boys who wanted to show their shining manhood to anyone available? Beats me….

Onwards to a curious school near Wisborough Green in Sussex. We were all allowed to wear home clothes, roller skate a lot and cause havoc at Christmas parties. The one that comes to mind was organised by the headmaster out of the kindness of his heart, and turned into the finest food fight I’ve ever witnessed. One of the hard working students took over the Christmas cake, and carefully cut off slices before he threw them. I’ll never forget the patient look on the headmaster’s face as a slice flew past him and ended up sliding down the dusty portrait of the founder.

The school was self-sufficient, so even employed its own team of builders. A memory that will never be removed until I leave this mortal coil is seeing a nearly completed staff house fall to the ground, with the builders jumping off the roof for their lives.

My old friend John Cleaver, sadly no longer with us, was there. He always wore enormous sweaters and could be depended upon to produce a jam sandwich from the woolly folds to slake your early teenage hunger. Happy times.

And onwards, to a single term as a day boy at a local school (I don’t think my alma mater was quite ready for me) where the headmaster was removed rapidly for gross indecency, and I starred as Robin Hood in a school play. This piece of natural casting was spoilt on the first night, when my wooden sword was broken in half and apparently I just stood and stared at it. How the bastards in the audience laughed at my first dramatic role.

And so to Sutton Valence in Kent, where my father and my brother had both distinguished themselves, on and off the sports field. Within days I realised that, no matter how stupid and thick you were, you would always be a superstar to your peers if you could run about with a ball tucked under your arm. (Sorry, that was a sporting reference. Not something that went on in the showers.)

Our poor little curly haired hero just wanted to be an artist, but I hardly dared to say that, apart from to Mr Simmons, who was the art teacher and encouraged me into a feast and famine career that has lasted sixty years since then.

Now for the good bit – and don’t forget we’re talking 1950s here, not 1850s. The horny, rugged, prosperous seventeen year old prefects were allowed to beat the younger boys with canes. Yes proper canes. The wrong doer would lie in his bed after lights out, waiting for the dorm doors to open, and the familiar voice of whichever bullying prefect would yell your name. Into the shower rooms to receive six strokes with only your pyjamas for protection. Lifeless, holding back sobs, wishing for mummy, bleeding, the offender returned to his bed for some troubled sleep and the promise of more delights on the following day.

So it went on. A useless barbaric waste of time and my father’s hard earned money, apparently to make a man of me. Even today I never miss an opportunity to bad mouth the evil place, memorably during a Radio Oxford interview with Bill Heine. He found the whole tale hard to believe. I just hope and pray that said prefects went on to be small fish in big ponds, failed, and never found a more satisfying way of quelling their sexual desires.

I might have been a wet. I may have missed my mum and my sister, but my life has been fulfilling, I’ve had many moments of glory, and I don’t thank Sutton Valence for one of them.

I went back a couple of years ago and met up with a few old friends. There are girls there now, which would have changed the dynamics so forcibly in those black and white days that a female prefect giving out beatings would have had the male prefects forming an orderly queue all the way to the shower rooms.

The head girl showed me round and told me how gentle everything is now. She was terrified of leaving and going out into the big wide world. Big changes.

For years afterwards my worst nightmares were being back there. I’d wake up in a cold sweat waiting for the door of the dorm to open…