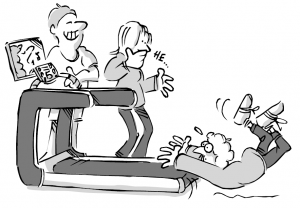 As dozen upon dozen of nubile young women can testify, I have a fine manly figure. So Cathy’s suggestion that maybe we should join the gym came as a bit of a shock, and took a mean side swipe at my delicate ego.

But anyone knows that trying to disagree with women is a hopeless cause (e.g. Spanish apartment, new small dog etc…) so I concurred.

Early discussions dismissed the local leisure centre because the pool is always too crowded, and the local stately home is too far away (and too expensive).

We settled on an outing to the Oxfordshire, a beautiful golf course which nestles seductively, curvaceous under soft green sheets, only minutes away from our gorgeous country home. As we drove up the long drive Cathy mentioned that it looked as delightful as a safari lodge in the Savanna or somewhere. I didn’t know what she was talking about, but it was obviously going to be a day when learning curves were going to be bent beyond recognition, so I concurred (concurred again. I might change my name to William and become William the Concurrer…).

We met up with a fit young man who grinned with about two hundred teeth, and bounded off towards the torture chamber.

Now at this moment I should digress, and tell you that I have a small failing. Oh shhh. I tend to press buttons if they are there. Like when I was with Lotte in an x-ray room and I pressed a button because it was all red and pressy. An enormous x-ray unit came hurtling towards us, and if it hadn’t been for Lotte yelling at me it would probably still be moving… and would be due to pass our house by next Tuesday. Anyway, it stopped. It must have responded to the timbre of her voice. Digressing further, my son, who has inherited some of my genes (the stone wash flares) stopped the London Eye, and got us a good telling off from the man on the loudspeaker.

Back to the plot. Mr Fit showed us round the machines and explained everything. Strangely he seemed to be addressing Cathy most of the time. I translated this as evidence that he thought I was fit enough already.

I got on surprisingly well on the bike thingy, mastered the cross trainer (didn’t make it any more cross) and approached the running machine with trepidation.

“Start off gently” Superman said, “and build up gradually.” Well, it all seemed very simple. I was strolling along at a speed I could have coped with for at least three minutes when I noticed three buttons marked 2mph, 4mph and 6mph.

Not wanting to show Charles Atlas (that’s for the older readers) that I was a weakling and could easily have sand kicked in my face, I hit the 6mph button. The thing took off at high speed and, in spite of hanging on to the handles they provide, I flew off the end and landed badly a few feet back from the machine from hell. Everyone stopped running, pedalling, straining, and looked at me. People were saying “are you ok?” and other bloody pointless remarks, to the extent that I could admit to bruising of my pride as well as my sore knees. I limped out looking a bit like Mo Farah. A bit…

I have probably mentioned in the past how fabulous, and just plain gorgeous, my Cathy is. And on this occasion she didn’t disappoint. After the merest hand over the mouth to staunch a giggle she suggested we should repair to the bar. Love her. Don’t know why…

Here we are a few weeks later, and I have been to the gym virtually every day. Waving at said fit bloke I stride in, plug in the earphones, and listen to half an hour of Hancock, the Goons, Dad’s Army or Just a Minute. Anything to take away from the infinite boredom of exercise. How these marathon runners cope I’ll never know.