in a world of their own… 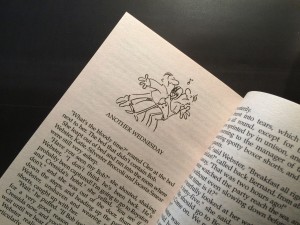 Curious things, publishers. I am convinced that they actually don’t want to publish books at all – and when they do it’s grudgingly, with a proviso or two, including ‘We’ll totally rewrite your precious manuscript for you.’

Up to 1976 my main claim to fame, apart from designing window displays for Mary Quant and Harrods among others, was that I had had a children’s book published. It was a struggle because (a) I wanted to use my own cartoon illustrations, and (b) they didn’t seem particularly convinced that it would sell. Luckily it did. About 80,000 copies.

Fresh from this dizzy success I put pen to paper again (older readers will understand this expression) and again, and again. To cut a long story short, I now have enough unpublished manuscripts to hold up the leg of the largest and wobbliest table in England.

But maybe I don’t fully understand. Or maybe they don’t. Richard Adams was turned down by ten publishers before he found someone with enough faith in his seminal work Watership Down to push it out to that dodgiest of all audiences, the public. J.K.Rowling struggled a bit before meeting with the sort of modest success that can stop you writing in the corners of seedy cafes and become one of the richest women in history. If I was a publisher I would have turned down Harry Potter by about page ten, labelling it as a silly bit of nonsense on that ridiculously overused theme – magic. So it’s probably lucky I wasn’t in that job, because I may have been kicked unceremoniously onto the street, as my publisher boss flounced back into his Regency style Bedford Square offices.

Incidentally I think J.K.R. is one of the finest authors we have (apart from my friend Sharon.) Under a pseudonym she wrote a brilliant gumshoe detective tale that showed how clever she is, how unmoved she has been by her gigantic success, and how much she still loves her craft. What a woman.

Anyway, back to me (it never drifts far does it). Over the years I have supplied cartoons for loads of books, including a delightful series of hilarious volumes under the banner heading of Curiosities of….cricket, golf, football and politics. Neat little drawings that still look good to this cynical eye, even though they could be as much as twenty years old now. Other subjects that have benefited from my quirky line style include sport generally, psychology, teaching, whisky, teenagers and Martians. But not necessarily in that order.

But my dream is for a publisher, or a smarmy film producer, or anybody really, to step across my portal and offer to take my comic novel A Rum Do to the stars. I have been accused many times of getting so much satisfaction out of actually writing things that I promptly forget to try to get them published afterwards. I have sent copies out to a few of these strange professional book refusing people, but I know what their answer will be, so I stop bothering.

Unless you, you gorgeous publisher, who has just read this article with enormous interest, know any different. You’ll easily find my number. It’s in the book. (You know the things – those lumps of paper you try to ignore…)