Robert Duncan visits as lyricist, and 35 years later as cartoonist… 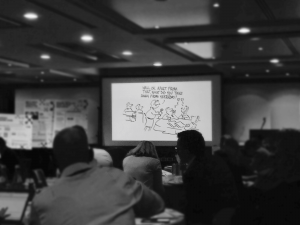 Back in the day (which is a cool way of saying way back when, years ago, when I was younger, time was… etc) I was working with darling teenage friends Gordon Waller (Peter and Gordon, number one with World Without Love, April 1964) and Robin Box (lead guitar with White Plains, Julie Do Ya Love Me, When You Are A King, 1970s) on a musical about Leonardo. I’m not saying we were teenagers then – we left that privileged position in the mid-sixties.

But dear friends we were, and if Gordon had managed to stay with us, change that to ‘are’.

It was the most exciting of times. We produced what we still consider to be a vastly underrated musical which, unlike today, didn’t have a naff song in it, and had several solid gold showstoppers. Thanks to sound man Bari Watts, genius director Peter Wheeler, and the Thame Players, we rocked the town to the extent that we predicted that Andrew Lloyd Webber’s stranglehold on the West End musical was over. We took Leonardo into London for a brief and appallingly unsuccessful run, and returned home to lick our wounds. In my case, the wounds were mainly on my wallet. I lost the value of a small house.

But I digress (again, I hear you say). During the time I was deep into writing the book and lyrics for this masterpiece, I thought a trip to Florence would be in order. So off we went, finding time to visit the Uffizi, try out the local bars, and take a train to Vinci. A beautiful friendly place – giving me the line ‘Vinci, little town of inspiration’ which worked in well with Gordon and Robin’s riff or whatever they called it.

Cut to 2017, and I got a call in my capacity as conference cartoonist – where I turn up, listen to the topics of the day, and draw mono cartoons about them. I say to these wonderful clients that I will do at least 25 in the day, and on this occasion I managed 36. Lovely people, lots of ‘I wish I could do that’ and ‘you’re amazing’ which drives me on for some reason, and the day was done. After a business-like gin and tonic we all went to a delightful and historic restaurant, and everyone was totally chuffed with (a) how the day had gone, and (b) me.

Tired but happy as the saying goes, I returned to the hotel with Hilary, the client, and we both enjoyed another business-like gin and tonic as a nightcap. Breakfast was arranged and I suggested we should go up to the Piazzale Michelangelo, which I had remembered word-perfect from my eighties visit. A panoramic view of this beautiful city, with the River Arno meandering through it, and the Ponte Vecchio, with its curio shops, a bit like the old London Bridge we’ve all read about, crossing it in fine style.

Photos taken, grinning in front of the view to spoil it, it was time to get off to the airport.

Leaving this lovely place again. I took a photo of the plane and got a bollocking from ground staff. But there we are. This part of Italy hasn’t changed much for hundreds of years, but sadly security has.

‘Beastly Madness’ as Leonardo said, referring to war. Great title for a song. Thank goodness I used it back in the day…