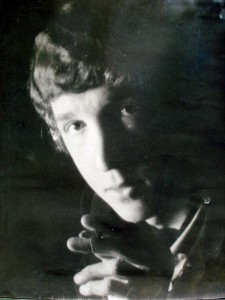 Because Gordon, who was the Gordon part of Peter and Gordon, was one of my best mates, I got to meet far more than my fair share of v famous people. And if I’d got to number one in 1964 with Lennon/McCartney’s World Without Love I would have been far less generous than he was, feeling that my old Pinner chums weren’t nearly cool enough to introduce them to the likes of Marianne Faithfull, Brian Jones of the Rolling Stones and the Beatle himself, Paul McCartney. But not him. He took me with him constantly, proudly introduced me as his friend, and raved on about my dubious talent as a painter and cartoonist. Bless his memory.

The reason I mention it now is that it reminded me of another slightly tenuous Beatles connection. A great friend of mine, later to become my first best man, was a film editor – getting good gigs like Summer Holiday and …um…can’t remember. Anyway, we started a little film company and the plan we had in place to raise the necessary doe to make our low budget gritty black and white British movie was to sell 35mm spacer stock to film directors – who obviously stood in line to buy our fine product.

This is what we did: in those days, my child, they used to have sound tape which was sprocketed and the same size as the 35mm film stock. The mighty film men would then watch the rushes (are you keeping up with this?) in their viewing theatres with the sound and vision running together but separately, if you see what I mean. No? Never mind..

During long silent moments in the soundtrack it made financial sense to splice bits of old film into it, rather than waste expensive sprocketed recording tape.

There you are. You can relax now. Complicated bit over… What my friend and I did was to collect 35mm out-takes from wherever we could find/pinch them. Then we would take a cutting room at Pinewood every Sunday afternoon, and splice all the material together to make up finished reels of spacer stock.

One Sunday, preparing to drive through the Pinewood gates and wave at the gate man in true John Mills/Jack Hawkins/Diana Dors style, I noticed a box of film stock casually sticking out of a rubbish bin. I placed it in the boot, and the very next week I watched it on the Moviola in our cutting room.

Outtakes from the Beatles blockbuster A Hard Day’s Night.

I took the boxes home, and there they stayed, moving with me several times, and gathering dust. Then the Chris Evans show chose as their subject of the day Beatles memorabilia. Mine came in at number five, and shortly afterwards a BBC reporter contacted me for the story. He was wonderful. We sent a CD copy of the material to Apple (the Beatles company, not the other one whose doings escape me at this moment) and they paid me a tidy sum for some junk I’d found in a bin nearly fifty years ago.

Good eh? Who’d have thought I could have had an interesting subject to talk to Paul McCartney about, instead of standing there gorping at him in wonder. Afterwards Gordon said “He liked you.”

Attached a picture of what this likeable lad looked like at the time.