That’s what Robert Duncan seems to be doing constantly… 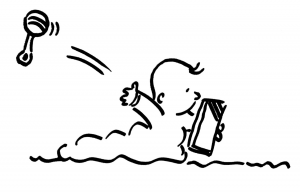 Before all you sweetiepies say “we know that” or “tell us some news” or more likely “here he goes again” I thought I would expand (and expound) on my chosen way of making a living.

I think I may have mentioned in the past that I first hit on the wonderful idea of becoming a cartoonist when I was about six. I was soppy, curly hair shoved mercilessly into a voluminous powder puff blob on the top of my head, wheezy, and with a lisp that my mother thought was cute and nobody else did. And I was no good at sport. Result? I was in danger – so I decided that I would attempt to amuse everybody. That was in the late forties (oh stop it, I know I don’t look it) and still largely applies today.

Suffice to say my darling Dad ended up being very proud of me, and at least I have a job that brings the response “Do you really do that for a living?” It is constantly fun and has given me a silly outlook on life that colours my entire world, from the way I go on at dinner parties, to the chat I constantly give to my long suffering wife, to the jokes and half baked advice I offer my little son and heir.

And in reply to your next eager question, this week I have done a speed drawing cartoon under camera about the pound perishing on a Guy Fawkes bonfire, completed 34 cartoons for a technical book which is now going to be funny, and done a series of quarter page cartoon ads for a fab vodka co (including the typography) to appear in The Week. Order your copy now to avoid disappointment.

Waiting in the wings is my alphabet book, AlphaBetty, which is good, and could be possibly half as successful as I think it ought to be.

No point in hiding your light under a bushel, so to speak. That’s what I do – and unlike some pop stars I could mention, I seem to get better at it all the time.

Compare that with retirement, playing golf in Bermuda, and wandering around looking distinguished. I don’t think so…