Robert Duncan turns his attention to an art form that’s as English as fish and chips, and as seasidey as your bucket and spade… 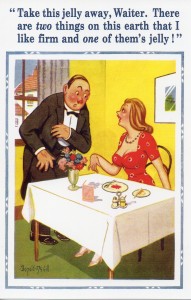 Considering the time, the twenties right through to the fifties mainly, McGill was very risqué (and probably quite risky) indeed. His busty young girls, enormous and bad tempered older women, and skinny little red faced blokes spent their lives talking in double entendres, fooling around behind breakwaters, making crass remarks about odd shaped fruits, and taking the piss out of vicars. He frequently got into trouble, from the publishers, from the public at large, and mainly from the local authority of the seaside town where his cards were displayed. Apparently these upright clean living citizens, these doyens of society, actually had editorial control on the new season’s McGill masterpieces, and would, as they probably put it, pass a resolution.

Ronnie Barker (who knew my father so there) was an enormous fan of the classic seaside dirty postcard, and owned an enviable collection of these fabulous examples of the cartoonists’ art. And he should know humour – he delivered the very best of it throughout his lovely lifetime. I’m sure he was far funnier than the average councillor.

Without taking reference from any McGill collection, in books or on the internet, I will tell you my personal favourite. Vicar walking along the other side of the road. Two busty girls discussing him. One says to the other ” she wanted to marry him but his stipend is too small.” Tee hee.

Later in this piece I will have referred to my own book on the subject, which I will lace seamlessly into this curiously exciting article, to the extent that you will never tell whether I’ve been away from my iPad keyboard or not. There you are. You didn’t notice did you?

Regular readers of my deathless prose will know that I have a great affinity with the Isle of Wight. So it will come as no surprise that Mr McGill features on that fabled land somewhere. And here it is. There was a Donald McGill Museum half way up Union Street in Ryde, on that very island. I was down there with my team and we visited this fantastic exhibition before meeting v old friends Mary and Graham for lunch. Located at the back of an incredibly stylish coffee shop, with murals and frescoes of Tenniel’s wonderful Alice in Wonderland drawings, was a display of literally hundreds of McGill’s oeuvre. The only snag, after you’ve viewed one rude vicar, fat lady in red and white swimsuit, and dazzling blonde falling out of her bikini, is the need to share one giggle after another. Cathy would laugh, bringing me to her, then I would laugh, hoping she would join me etc. it was that sort of a show. Made for sharing… like Maltesers.

And before you get too excited, and start booking your Red Funnel ferry, I have to break the bad news to you. It’s not there anymore. Last time I was there, enjoying a Cappuccino as I wondered at Tenniel’s genius, I asked the friendly owner where his museum had gone. I mean, you don’t just lose museums do you? He said rather vaguely that it had moved to an exhibition somewhere else in Ryde. So poo to that.

For your delight, and because I love you so much, I will share a few masterpieces from the mid-twentieth century non-computery pen of the cheeky (and graphically highly talented) Donald McGill. Here goes:

There you go. Harmless fun, unless you happen to be a town councillor. Beats the hell out of a postcard of a scenic view of Ryde pier, and leaves the recipient with the impression you’re having a great time – maybe with the busty blonde, but more probably with the fat lady in the red and white striped swimsuit.