As great a hero as the comic creations he drew…

I was brought up in Chestnut Cottage, a big old house in Pinner, reputedly used occasionally by Lord Nelson for trysts with Lady Hamilton, no doubt sailing his mighty galleon into the harbour of her heart.

Much has been recorded about my early years (solely by me) but I may not have touched on the subject of the flat in the west wing that my darling parents rented out to help towards the frequent and worrying costs of owning a big old house.

Len and Jean lived there for a while, and remained family friends for life, and so did The creeping Clibbon, who would grab your arm and tell you about his horrendous operations, which always resulted in ‘buckets of blood’. Later a friend of my father’s, Peter, moved in and wooed my sister in true Nelson style, to the extent that he became my darling brother in law, and was totally adored by everyone (especially my sister) until the day he died. 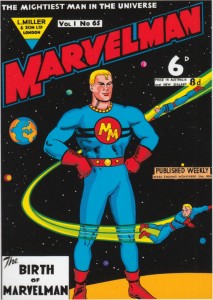 But that’s another story dear reader. This tale concerns a young artist and his wife who took over the flat, by the name of Don Lawrence. (That’s the name of the artist, not the flat).

Anyway, imagine a small undernourished lad of twelve, misbehaving curly hair teased into a voluminous lump, crazy about drawing and art of any sort. Me.

I locked on to the unfortunate Don Lawrence to the extent that I couldn’t see enough of him. I would spend whole days sitting by his drawing board watching the adventures of Marvelman developing before me. At the cry of Shazam! mild mannered whoever he was turned into a super hero, intent on saving the world from baddies. (Where is he now?) Occasionally he would turn to me and say things like ‘This guy behind the desk. What should he look like?’ I would say ‘how about round glasses and surprised hair?’ And he would say ‘great!’ And a few weeks later I would receive my very own action adventure comic with my own character invention in it. Twelve years old? Wow or what?’

On one occasion I took a whole page of my own comic strip to him and he said it was a hell of a lot better than he could have done at my age. I still hold that as one of the best compliments I’ve ever had.

I went up to the flat one day and he’d done a drawing for me – a Marvelman body with a little skinny bearded bespectacled head on the top, with the inscription ‘I hope you suit your profession better than I do! Keep drawing Rob. Don.’

The reason for this pithy (that’s pithy) article is that I googled him recently to find out how he got on in later life. You should really do it. His artwork developed until he was supreme, famous and respected worldwide.

In case you can’t be bothered, here’s an excerpt from his Wikipedia entry:

Not bad eh? I must have inspired him.

Don Lawrence lost his eyesight after a botched cataract operation and died in 2003. I owe him a lot, if it’s ok for me to be mentioned in the same breath…