it can be as simple as this. I turn up at your conference, listen and absorb what’s going on and draw about twenty five mono cartoons taking the subjects of the day as inspiration. These are yours to keep forever more, for websites, emailings and YouTube. I have been asked along to loads of these days all over the UK and Europe, by such luminaries as Coutts, Sky, LG Insurance, World Wildlife, BBC, Peaugot, EDF, Investor Relations Society, BAFTA and Volkswagen. 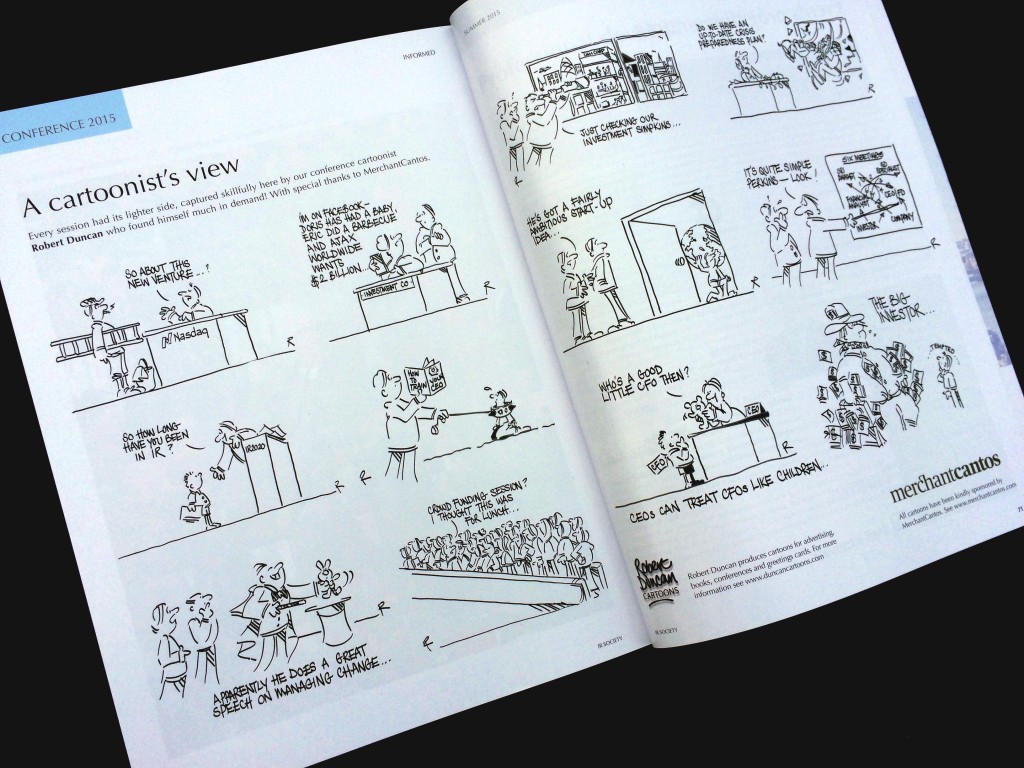 But sometimes it can get a little more complicated. The aforementioned Volkswagen was a two day event at Silverstone and I drew cartoons with a video camera over my shoulder, immediately streamed to a 20ft screen for the delegates to see live. So no pressure…

Volkswagen proved to be a hit. After the event they took forty of my cartoons and made them into booklets to send to all the delegates as a reminder of the event.

At a cyber security conference in Munich I drew an 8ft cartoon featuring all the ideas I gleaned from the presentations, and other thoughts supplied by passing delegates. The large result is still gracing the client’s office wall. 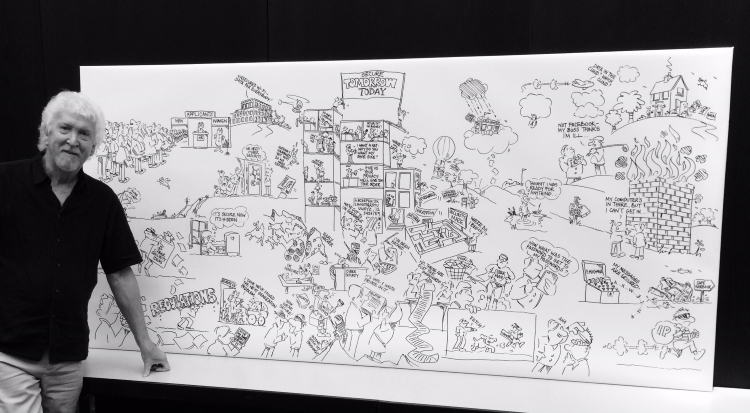 The same basic notion for a chain of legal firms. Everyone was invited to suggest elements of their business which were successful, or needed work. At an early meeting modes of transport were discussed, since the theme of the event was a journey. I suggested a Mississippi River boat, because the open construction allowed for loads of spaces for cartoon scenarios. In a hectic day (where I missed lunch) a 6ft long drawing was produced, encompassing every idea the many delegates had.

And there was the time (he went on) when I sat on stage in a tux drawing live to camera, while the diners and potential award winners had a pre-presentation dinner. Twenty wise and witty cartoons in an evening. Not bad.

And before this article hits the shredder, The Investor Relations Society, who became particular friends, had me sitting on an exhibition stand, and every few minutes a techy guy would appear and transfer my meanderings to a big tv screen. Later they put several of my drawings on
a double page spread in their magazine.

The future is this. I have recently been scanning my cartoons as I do them on my phone, and sending them via Bluetooth to the control centre of the conference. These can then be projected to the delegates immediately, or put out on Facebook to show the world what fun they’re having.

My iPad Pro will easily transfer the process of my live drawings to the big screen, so people can watch the cartoon in progress without seeing my hand.

That’s my conference cartooning at this time. Good eh?