A children’s story by Storysmith… 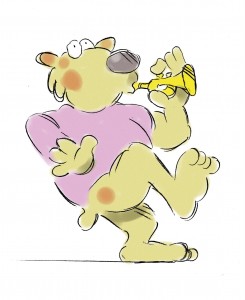 In the dark and misty plains of Macadamia there lived a boogie bear that played a small but loud trumpet from morning to night. Wherever you happened to be in the dark and misty plains you could hear the plaintive tones of this trumpet whatever you happened to be doing. Many zee horses depended on silence as it was their only weapon. They would creep up to their favourite lunch and eat him before he had the chance to discuss the whole thing. Other local creatures such as the wee wee bird would depend on silence purely because they flew constantly and never touched the ground. Hence they were constantly tired. Many other inhabitants, far too many to mention, suffered in a similar way.

In short the serenity of the dark and misty plains was totally ruined by the loud and often tuneless strains of the boogie bear’s trumpet.

One night all the creatures met up secretly to decide what to do. They considered telling the boogie bear’s parents, but then remembered they had gone away to Morgovia Minor and had never come back. (“Not surprised” said one of the wiser zee horses.) Many suggestions were made, but in the end a decision was reached.

They would jump out on the boogie bear and trip him up.

They all laughed and said things like “That will do it!” and “Brilliant!” before they set off to put their plan into action.

The boogie bear was walking through a damp clearing, playing a sad tune on his trumpet, when a bony foot came out of a bush. Before he could stop himself the unfortunate boogie bear fell flat on his face, pushing the trumpet right into his mouth.

There was perfect peace again in the dark and misty plains.

And that is why any boogie bear you ever see has a mouth shaped like a trumpet.