Off to Scotland to draw some wee piccies. Aye… 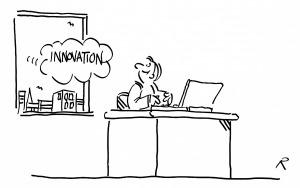 I left Luton on a wing and a prayer last Tuesday, heading for Glasgow to do one of my conference cartoon gigs. In case you haven’t been attending, I am invited to go to conferences and sit around listening to the speakers (on any subject, from satellite TV to colostomy care) and produce up to 25 wise and witty cartoon gags in a day. These are then used for websites, emailings, newsletters, or in very extreme cases (like Volkswagen) turned into little booklets to send to the delegates as a souvenir of the day.

But the whole thing has become more complicated, and consequently more fun. Very often the imaginative and ground breaking client will supply an 8 ft board for me to create a mighty cartoon featuring the topics of the day. On one occasion I trundled a large roll of paper to Munich to do this very thing – and they loved it so much it is now in pride of place in their boardroom. And I have drawn cartoons live on my iPad Pro so the happy punters can see them developing on the big screen. Or I scan the A4 pictures on a sensational app on my phone and transfer them via Bluetooth to the AV desk for immediate projection to the pre-mentioned big screen.

Anyway, enough of that short and very snappy commercial. To get back to the plot I was flying into Glasgow for a conference hosted by a well known computer company. I stayed in a hotel in the Gorbals, which used to be incredibly seedy, and you had to be a mean machine to even enter its dodgy streets. But it’s ok now, and a lovely well maintained area, without a flick knife in sight. I must say I was grabbed by the Gorbals.

Still with me after that? I arrived at the venue at 7.30am and was made very welcome by everybody. Soon I was churning out some fab cartoons which were immediately transferred to the walls of the venue, a fantastic old brewery which has recently been taken over and is well worth a visit. Not that I tried any of the product you understand. 26 cartoons and a happy client later I was enjoying a glass of wine with all the jolly delegates, who incidentally were asked to wear Scottish attire and responded in varying degrees of keenness, some wearing a tartan tie, others looking like they could give Rob Roy a run for his money.

That evening I had that lovely feeling that I’d delivered what I was being paid for, had come up with some highly original ideas, and had delivered my own peculiar way of making a living pretty well.

So there was only one way to celebrate. Another glass of wine in the hotel bar, and a gammon and chips with a fried egg! Boy, I know how to live…

My plane didn’t leave until 3pm the next day, so I spent the morning (a) having a major breakfast, (b) watching two episodes of Frasier which were totally brilliant, and (c) writing some bon mots a bit like this on my iPad for eventual publication to my adoring fans (how are you sis?)

I reached Luton Airport in a white-out snowstorm and spent the next two hours attempting to drive home, thanks to my kindly satnav’s choice of skinny ice covered c road short cut, where my car made up it’s mind to slide around exactly as it wanted, ignoring any driving instructions and tweaks that this seasoned driver attempted to add to the mix.

Tired but happy, as the expression goes, I got home to complete Jamie’s part of a Scrabble contest, because he’d totally lost interest. My seven letters were UTUFLCK to be added to the word ON.