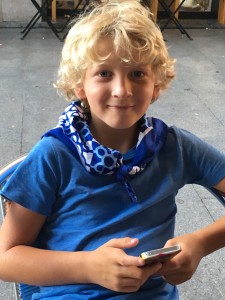 After a month of lazing about in and around our Spanish pad, with a load of friends who also enjoy (a) the sun, (b) eating out at any of a dozen alfresco restaurants and (c) putting away a few businesslike gin and tonics, we were just about ready to go home. So after a nine hour drive we finally arrived in Bilbao, ready for a simple dinner and a quick stay-over before we boarded the boat to whisk us back to reality.

The plan was to go to the city centre, have a gentle wander round, and have supper somewhere.

Not to be. We dumped the car and came out onto a street that was hopping. Thousands of people, street theatre, wonderful stalls, bars, dancers, and more people, all jostled around the river and up every square and side street that the lovely Bilbao has to offer.

What was the occasion? Cathy used her enormous knowledge of Spanish to establish that it was a festival that happens over a week every year. Everyone was wearing blue scarves, so we bought one for Jamie, who wore it proudly throughout the evening. After a couple of gin and tonics for medical reasons (clearing the effects of the swirling dusty streets) we found a lovely little bistro that suited all our tastes – a rare thing. We had duck breasts that were so wonderful, and so big, that we decided that Bilbao ducks probably stood about 6ft high and were not worth messing with. A quack from one of those would reverberate deeply, and probably shake glasses off tables.

Still in the mood to show off his new scarf (illustrated) Jamie set off with Sam to chase Pokemon Go or something, and only returned when an enormous bang brought them back to reality. Happily it wasn’t the work of a terrorist bent on ruining everyone’s life, but a gigantic firework. We decided to thread our way through the throng and find our car. We crossed a crowded bridge and edged our way vaguely in the direction of the absurd Guggenheim Museum (the exhibits, not the fab building) when another serious firework went off. A display the like of which I have never seen before followed. It matched the new year wonders around Big Ben that we only see on television – but this time we were seeing it live in all its glory. My love and respect for Sam increased further, if this is possible, when he lifted up Jamie so the little bloke could see better, and held him there for the duration of the show, which was probably twenty minutes. Bless them both.

Apparently the fireworks happen every night of the festival, with local sponsors trying to outdo each other, and spending what must be in the region of €40,000 a pop.

Tired but happy, as the saying goes, we returned to our hotel, all feeling thoroughly chuffed that we had gate crashed someone else’s party in such great style.

Sadly holidays have to have their last day, and you have to return to reality, but a night at the Bilbao festival must be one of the best exit plans ever.

The Duncan family take to the seas… 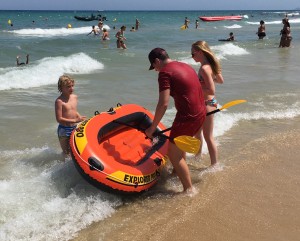 We have dined in Marbella, gazing through the rims of our Bollinger glasses at the beautiful yachts just waiting for us in the harbour. We have watched the sunset over the Bay of Naples as the world’s finest examples of the boat builders craft sail peacefully by. We have been on board the Queen Mary as it made its way to Hamburg. And I always think “What a long way I have travelled since we sailed our own modest little boat in the Isle of Wight all those years ago.”

How times change. Not only do we now own an enviable pad in Spain, but we also have our very own craft.

Getting it down to the coast was simple. Not for us the perilous Bay of Biscay route – we simply loaded it in its box into the car and there it was. Orange, shiny, self-assembly oars, all ready to take the risky tides of the Mar Minor head on.

Cathy, who is rather good at these things, thought she should check the instruction manual, since the briny can be a dangerous enemy. Just ask Christopher Columbus and all those poor people on the Titanic.

Here, word for word, are the notes and warnings supplied, that need to be observed… 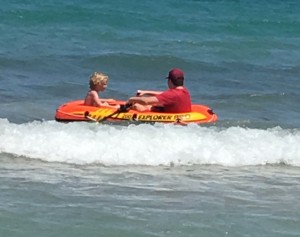 Be responsible, do not neglect these safety rules. This could jeopardise your life and the lives of others. Do not drink alcohol or take drugs while operating the boat. Maintain passenger sobriety.

At planing speeds, in rough water or during sharp turns, all passengers should position themselves on the floor. No bow riding – this is illegal in most areas and is extremely dangerous. In case of falling, the man overboard is in the way of the propeller. (Propeller?)

Be especially careful when docking. Arms and legs may be injured if they are outside the boat. Keep a sharp lookout especially when operating near beaches and launch sites. Avoid sharp turns at high speeds, you could get ejected from the boat. Do not make changes in direction without advising passengers.

Avoid contact between the buoyancy tubes and sharp objects or aggressive liquids such as acid.

Do not smoke on board.

As you can see from the pictures, Sam and Jamie observed these rules to the letter, and had a safe and pleasant cruise. Poor old Robert Maxwell could have done with these handy tips. I wonder if his yacht cost more than eighteen quid…