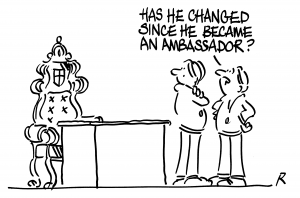 Ronnie Barker said that, in case I’m accused of plagiarism. It has nothing to do whatsoever with the tale I am about to relate to you. Those lovely people at Sky decided that www.duncancartoons.com attending their Edinburgh conference was just what they needed if they were to become a successful company. So they made their first overtures and said I was (a) rather expensive and (b) not Scottish. I said I was a bit, just look at my name, but they said that they naturally presumed I lived in Scotland. Strange.

Anyway, all that aside, we agreed that I should do the whole gig in a day, and they would cover all my travelling expenses. I decided not to walk or go by bus, and by 4am I was in the shower, and, hair tweaked to perfection, on my way to Heathrow by 4.45 to catch what my wife calls (probably because of her international connections) the Redeye. Parking was a joy because the gorgeous pre-mentioned wife had arranged it. As my car rolled up to the gate the gadget thingy read my number plate and I was in. Well fancy that.

Plane on time. Bloke next to me drinking wine, and I was in Edinburgh by 8am, probably before the Queen Mother’s favourite piper had staggered up to the castle battlements to give us some merry ditty or other. A car met me and whisked me off to the venue – a place where strange people insisted on climbing sheer rock faces for no apparent reason, risking life and limb as they carried on in their hearty way. I watched this scenario from a large windowed area on the fifth floor as I enjoyed my first Scottish coffee since I had been to that misty mystical land in the seventies, when I handled the Caithness Glass account single handed. (Thinks…that’s a blog idea…)

I was greeted by the lovely Veena who gave me the sort of welcome that only lacked a red carpet, and had the good grace to laugh at every one of the 25 or so mono cartoon gags I drew throughout the day. She even took my cartoons away at regular intervals, scanned them, and projected them onto the big screen for all the jolly Sky types to enjoy. And her boss gave me a great write-up in his speech too, when he said I had grasped what they were all on about incredibly quickly. Liked him a lot. Can’t think why…

After getting away with the fact that I don’t have a Sky bowl or whatever they call it, I got into the car they had organised to take me back to the airport. I spent a happy few minutes (a) thinking that the whole thing had been a success and what a lovely, if silly, way to earn a living and (b) listening to all the really understandable reasons why the driver had voted NO.

Single glass of Sauvignon at the airport and mighty white bird flew me to our own land. Car easy to rescue. Drive home bearable, and a lovely welcome from my gorgeousness.

Same sort of thing yesterday in York. Munich on Tuesday for a couple of nights. Hope they don’t expect me to speak German (better re-watch that Fawlty Towers episode) and then off to Tenerife on a five day cruise where I will run a few cartoon workshops for those jolly boater and gym shoe cruising types.

Can I bear it? I think I can. Probably…

And if you haven’t got a clue what the hell I’m talking about, go to this now. NOW: http://www.duncancartoons.com/conference-cartoons

Now your PowerPoint presentations won’t be boring at all.
Ok, maybe just a bit… 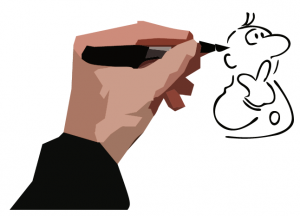 I’ve been sitting under photo flood lights so much lately that I’m surprised I’m not getting a tan. The reason I am there is because I have been producing Speed Drawing cartoon films, under videographer Alan Fenemore’s prying camera, for about three years now. Each film last two or three minutes and features my hand drawing about a dozen or so wise and witty cartoons that Alan makes go faster to fit in exactly with our previously recorded soundtrack. Regular readers of this award winning blog series (I often award myself a glass of wine for my troubles) will know that it’s hard to shut me up on this subject, but suffice to say you can see lots of samples on http://www.duncancartoons.com/speed-drawing-films

Now here’s the thing – I had an epiphany (it must have been something I ate) and realised these cartoons could be done as singles, and could breathe life into boring PowerPoint presentations. The client sorts out the scenario with me, and I simply draw the resulting cartoon on camera, and freeze the final frame of the completed cartoon for the speaker or presenter to change at the click of the clicky thing.

No soundtracks to worry about. Minimal editing. All presented to the client in the format of their choice to insert into their programme.

This is how it works: I talk to the client and we sort out how many cartoons are needed. (I have done plenty of single frame drawings for presentations in the past, but never actually showing the process of them being drawn.) I do visuals and the content is decided. I then draw them under Alan’s camera and… job done.

If the cartoon is mono, and not ridiculously complicated, the first would cost a mere £250. Subsequent ones are £125 each.

So for a small budget you can breathe life into your speech, keep everyone awake and maybe even smiling, and go home with praise still ringing in your ears.

Think how jealous the next speaker would be…

Here’s a link to a slightly embarrassing little film I made to promote this exciting development, that could be the most fantastic advance since the launch of the lectern. https://goo.gl/Fgb9uI