Robert Duncan could write a book on it… 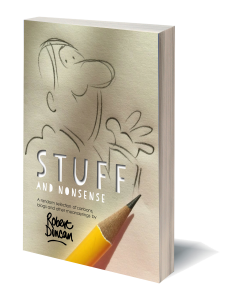 Pre-empting what will obviously be a ground breaking blog about my forthcoming five day cruise to Tenerife, where I will be holding workshops about drawing cartoons, I will tell you about my book. The title is as the headline of this article, and this worthy tome will contain elements of my work (close inverted commas) – funny and serious cartoons, excerpts from some of the numerous plays and books I have written, some chat about my attempts at lyrics, more cartoons, and about 70 pages of the best of my blogs (in my opinion).

The big problem with producing such a blockbuster is what to leave out. Should I include that series of cartoon strips about funeral directors, entitled Mourning All? Is my favourite cartoon strip, about two people who spend their lives travelling in a car (and occasionally other modes of transport) and never getting there, wherever ‘there’ is, worthy of a mention? How about Vole RA? A strip that followed the mishaps of a Royal Academician who happens to be a vole, and all the problems that go with being so small. The title by the way was inspired by that old fifties Dean Martin number Volaré – so at least the premise was quite clever.

Big no to all that – but what about my forgotten masterpiece No The One With The Cherry On It? I left that out on the grounds that I didn’t finish it. Well ok, I didn’t actually start it.

Because I liked the grittiness of black and white, the raw honesty of it, the almost palpable courageousness of the concept (and ok, I couldn’t afford colour) the 170 pages are all mono. I really think that it doesn’t make much difference. If the printers proof is anything to go by, the drawings and photos look good – and the only picture that screams out for colour, and depends on it, is a cartoon for a cricket team. But this lack of meaning is carefully explained away in the caption.

But don’t despair, the cover is in colour – and guess how I did it, all you fascinated fans. I drew a two minute cartoon on a bit of textured paper, put the pencil on top of it, and photographed it with my iPad. Brilliant. No retouching. No photographer’s fee. Coo…

So the final selection was made, a mishmash of stuff (hence the ‘stuff’ in the title) and the nonsense bit speaks for itself.

So if you happen to be on a cruise to Tenerife, and you happen to attend a cartoon workshop under the careful guidance of some old white haired bloke, you will be able to buy a copy of this superb limited edition for ten quid.

But in case you aren’t, I have ten copies of Stuff and Nonsense to give away. I’ll even pay the postage. I’m like that. Simply email me on me@robertduncan.biz and I’ll send you a nice new shiny copy (or is it matt?)

The workshops will only take four hours out of my five days at sea, so I have been told in no uncertain terms not to spend the rest of the time in the bar.

No, I’ll go to my stateroom and start on my biography The Girl Behind The Red Door.

Boy oh boy – will there be a blog about that… 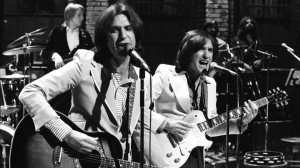 I am not given to standing up and waving my arms about at the end of shows, but I’m afraid to say I made an exception recently. My gorgeous wife (in whom I am well pleased) got tickets for the Kinks musical Sunny Afternoon. Kinks founder Ray Davies and his younger brother Dave obviously took the lead, played by John Dagleish and George Maguire with the most incredible energy, which wore me out just watching them – must be the age – and delivering totally brilliant renditions of Ray’s extensive songbook, and a plot that took us through their family history (including the sad fact that one of their sisters, who gave Ray his first guitar, died as a teenager on the dance floor.)

There was something about the intimacy of the theatre, and the warmth of the crowd, and the pure energy and talent I was watching, put Sunny Afternoon fair and square into the bracket of one of my most brilliant musicals ever. Lion King for special reasons, Beauty and the Beast for pure staging wizardry, Les Mis because it makes me cry every single time (right from a preview I saw in New York) …and this.

If anyone in the cast, and especially the two leads, ever get to see this modest blog, they can go to bed safe in the knowledge that they were involved in totally great musical theatre – and Ray, if you’re out there, you’re a genius.

One of the dozens of high spots was their translation of Waterloo Sunset.

This is the image I have got of this classic pop song – and I don’t want anyone to change it by saying it wasn’t like that, or it wasn’t them, or it wasn’t even that location. This is my version. Ray Davies was the more serious Davies brother. Dave, the younger one, was enjoying every moment of his fame by clocking up an unstoppable list of women and enjoying every inch of the rock and roll lifestyle. So I have Ray standing in his shadowy apartment overlooking the Thames and staring across the water towards Waterloo station. Inspired by the gentle evening lighting, as Monet was, he begins to hum a creation, develop an emotive thought in his own style of painting in sound. The apartment is silent, a million miles away from the noise of the recording sessions, the adulation of Kinks fans, the buzz of the Ready Steady Go studio. Alone. It is Friday.

He sees two people crossing Waterloo Bridge. Friends he has met at a few sixties parties. Julie Christie and Terence Stamp, who met on the set of Far from the Madding Crowd, and fell in love. The constant adulation and pressure of constant screenings, auditions and interviews is put on hold. Julie is meeting her lover and stealing away for a weekend alone in a country cottage, where they will live and lie together for a God given moment before they return to their commitments as two of the most beautiful people on earth. Ray smiles. He is happy with this quiet life, with his wife, with his incredible and highly respected song-writing talent. And as long as he gazes on Waterloo Sunset he is in paradise.

He turns back into his room, the shadows growing long now, adjusts the sleeves of his white linen shirt, and picks up his guitar…

That’s how I see it – and I believe the Sunny Afternoon programme gave a slightly different story. But I refused to read it, because my scenario will always be in my head, especially when I hear this, probably one of the most atmospheric and beautiful pop songs ever.