Still hopeful after all these years… 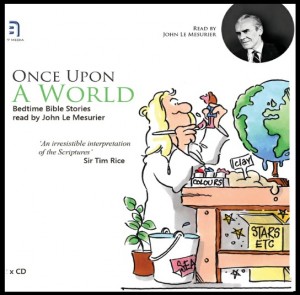 Waiting patiently in the wings for the gigantic earth-shattering success it deserves is my 1976 children’s book of Bible stories Once Upon A World. Even Sir Tim Rice used to read it to his children and said it was ‘an irresistible interpretation of the scriptures.’

You can still get it as a remastered double CD on Amazon. Read by the wonderful John Le Mesurier, which proves how old it is, and still sounding fresh as a daisy today. 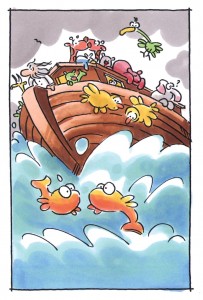 But God saw Noah, who was a very good man, and said, ‘I like Noah, but I don’t like the others much.’

The world had not turned out quite as well as he had hoped, so he decided to have a great storm, which would cause a flood, so he could start again. The flood would soon get rid of all the bad men, animals and everything that lived.

Before God started the storm he told Noah how to build a great boat – the ark. He told him how long it should be, how many rooms it should have, and how many windows and doors.

God said, ‘Now listen, Noah, when your ark is finished, I want you to get two of every animal, two of every bird, and all the insects and bugs you can lay your hands on. Then get your wife, your sons, and their wives, and put the whole lot in the ark. Right?’

Noah said he would do it, and the ark was built. Just as the last nails were hammered in, the sky went black and the lightning started flashing. God had turned on the storm.

‘Quick,’ shouted Noah, ‘everybody in. No pushing, you lions. Hurry up at the back, tortoises.’

But the ark sailed on. It bounced up and down a bit in the rough sea, but all the animals, all the birds, all the family, even old Noah, were safe and happy inside.

After a while the rain stopped banging on the roof, and sunlight started to shine through the cracks in the door and windows. Noah knew it was time to find out if the water had gone down.

He thought, ‘If I send out one of the doves it will soon tell me if there is any land showing yet.’

So that day, nearly a year after the ark had started its journey, Noah opened the window and the dove flew out into the clear blue sky. Noah looked round. He certainly couldn’t see any land, just sea, sea, sea. (As far as he could see.) The dove came back looking a bit fed up. ‘No good,’ it said.

A week later, Noah sent out the dove again. This time it came flying back, proudly carrying an olive twig in its beak.

That told Noah the water had gone down enough for some land to appear, so he left it a few days and then opened the door of the ark. All the animals ran out on to the dry land; the horses prancing about, the kangaroos jumping up and down, and the lions growling happily.

They all thanked Noah for the lift, and went on their way.

God spoke to Noah. He said, ‘ I promise I won’t flood the world again. Go now, and let all your children and grandchildren make the world a really nice place to live in.’

God went away again, leaving a lovely rainbow to show that he was going to keep his promise.”

There you go. Written when I was a lad. And still proud of it.

Any publishers out there?

Robert Duncan is reminded of a worrying train crash… 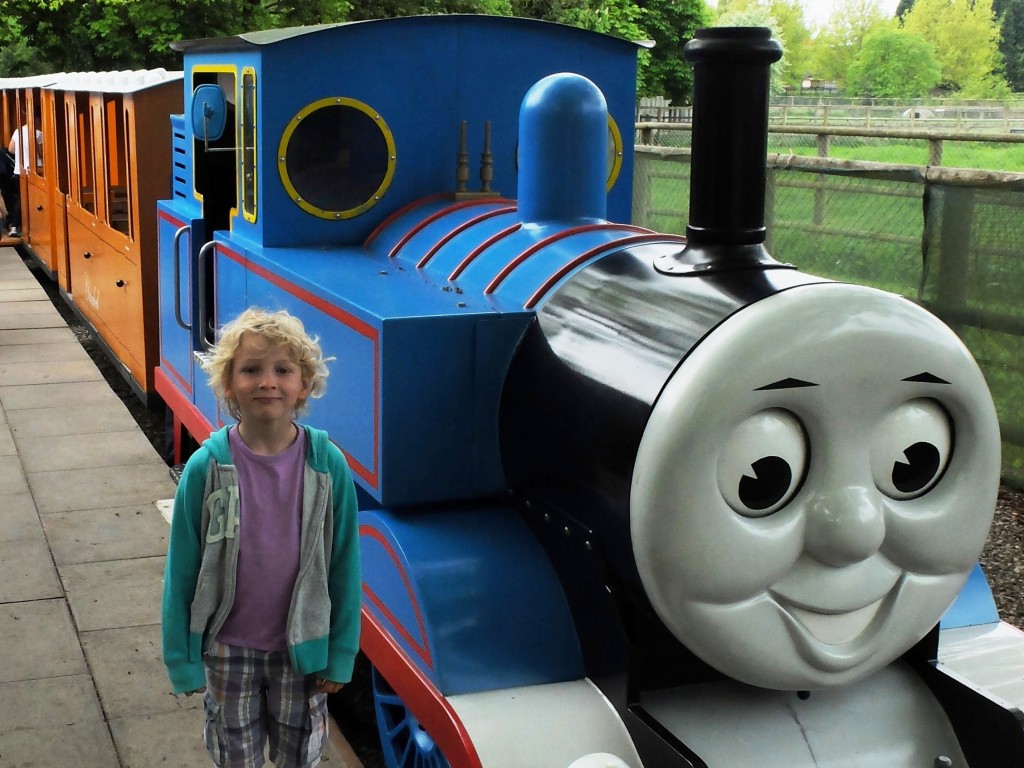 One of the many joys of being the ancient father of a six year old lad is having a really good excuse to go to places like Legoland and Thomas Land.

A couple of years ago head office announced that we were going over to Quainton, near us, which boasts a railway museum and a short track where you can actually travel up and down on a steam train. This is all operated by a team of volunteer enthusiasts, and comes to life especially when Thomas arrives (God knows how) and we all chat to the Fat Controller and we all get on him and ride up the track. ( On Thomas, not the Fat Controller.) Ah! The smell of the smoke, the beep of the whistle, the puffing and blowing. (Of Thomas, not the Fat Controller.) All too soon he is laboriously put on a low loader and dragged away to where he is kept. (Thomas, not the Fat Controller.) On this particular occasion we had done the Thomas ride, bought the souvenir Thomas model at the shop, had a coffee and sticky bun and were ready for the other delights that this fab place had to offer. Top of the list was a very small gauge train that you sit on the back of. It works properly, with coal and steam and everything – and railway enthusiast number 47 drives it round the little track. On this occasion we were building up a good head of steam if you’ll pardon the expression, and were turning a corner before we got on the straight back to the main station. Our driver, resplendent in greasy railwayman’s cap, leant out of his locomotive to throw the points switch and fell off. This had two immediate effects, or three if you count our horror at the bad things that were happening. (1) We realised that the engine was driverless and (2) the engine itself fell off the tracks and went over. I need hardly tell you that this had the effect of stopping the train, and left us all with very little to do apart from sit there and wonder what was going to happen next.

Luckily the driver hadn’t had some sort of attack and was well enough to jump to his feet and run to a little station that was a few yards away and would probably have been our next branch line stop. On bended knee he reached into a tiny signal box and pulled out a large phone to report the horrific incident. He then hurried back to us and told us to get off, and that help was at hand. In the meantime we all stood on a very small platform, with only some SIndy doll passengers for company, and waited to be rescued. The SIndy dolls were not in great shape either, which was strange since they had not been involved in the horrors of a train crash. They appeared faded, having been subjected to years of sun and rain, and were not in the least interested in our sad plight.

After many minutes of standing around among SIndy dolls in appealingly short skirts, very small pieces of luggage, tiny and sadly empty chocolate machines and rusty porters trolleys we were rescued and taken back to the main station, sadder but wiser men.

Jamie has never forgotten this incident and whenever reminded of it does a rather good impression of the train driver keeling over with a sort of aaaagh groan, and falling on the floor.

For comic effect I once tried the same thing, but I couldn’t get up again. Oh the joys of youth, 2nd class carriages, string luggage racks, slide down windows, whistles, tunnels and railways generally. And me? I used to walk down to Pinner station to meet my Dad off the 6.30 steamer on many sunlit post-war evenings – but that’s another story…

Nice work if you can get it… 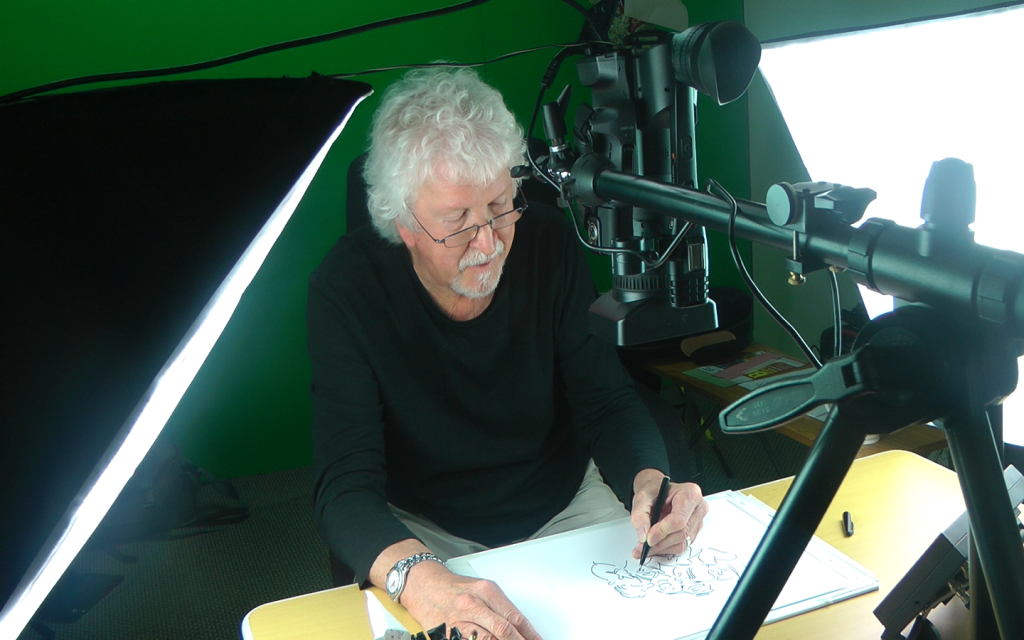 At the moment I seem to be doing an awful lot of drawing ( not a lot of awful drawing) under the watchful eye of Alan Fenemore’s big professional camera. There I am, surrounded by lights, fill-in lights, monitors, and small pieces of cardboard to remind me not to get my head in the way.

What we do is this. I meet a client and persuade him that life is no longer complete without a speed drawing mini-film to promote his company, product, service or event. He shouts hooray and the deal is done. I go away and write a script which is so utterly simple that even I understand it. I maintain that any story, no matter how technical or complex, can be told in a couple of minutes if it’s done properly – and boy, do we do it properly. (Yes we do.) Often the client has the nerve to add a bit of what he wants to say, and then I produce a storyboard – a sheet or two of cartoons showing how the programme will run. The soundtrack is recorded, normally at Steve’s Black Frog recording studio, and the result is checked by everybody. When this is all loved (or ok’d) by the client I get under Alan’s glitzy camera arrangement and redraw the cartoons, all in one sitting.

Job done, I buzz off to look for another lucky client, or to the pub, and Alan painstakingly goes through the footage (a bit like Spielsberg) and removes all the bits where I have hovered uncertainly over the paper, or stopped temporarily for a swig of tea, and speeds up the finished result in infinitely varying speeds to fit the voice-over exactly. He prefers to do all this alone, and strangely would prefer it if I didn’t help out. To ensure this he usually starts at about 7am. A guarantee that I won’t be there.

The other day I did one of my conference cartoon gigs for a lovely lot called the Investor Relations Society. During our preliminary meeting, when I said it would be handy to find out precisely what they do if I was to produce about 25 wise and witty cartoons chronicling the event, I happened to mention that I made these speed drawing cartoon films, and wouldn’t it be fab if we made one to put on their website to promote their annual conference. Guess what? They agreed, and the result was a neat little number which looked good on their website, helped to sell loads of tickets for this ultra-classy event, and looked especially fantastic when they showed it big screen to the 500 or so delegates, as a curtain-opener to the great day. I tried to start a ripple of applause, but that didn’t quite work. The lovely organisers of the event were very pleased with everything I’d done, as was I, and the main man’s daughter, who got a Duncan cartoon of her river dancing, was thrilled to bits.

So look at the Speed Drawing link on my website, and find out why I seem to be drawing away under Alan’s camera on a very frequent basis.

It beats graphic design into a cocked hat or whatever the expression is, and that’s been my living, with all the boring, fickle and undeserving clients, since I was a young lad. Give me Speed Drawing films, and conference cartoons anytime. They’re what I really am…